“Lonely, I’m Not,” written by Paul Weitz, is like watching a theatrical version of a thrilling James Patterson novel. Usually, his chapters are only a page long with an intense cliffhanger, and this play echoes that structure with a series of punchy sound bites, ending on enticing upward inflections. It’s a scene turner best seller. Every vignette ended sharply and catapulted you into the next moment, piquing your curiosity. I was hooked and wanted to keep “reading,” torch under the covers, until morning. 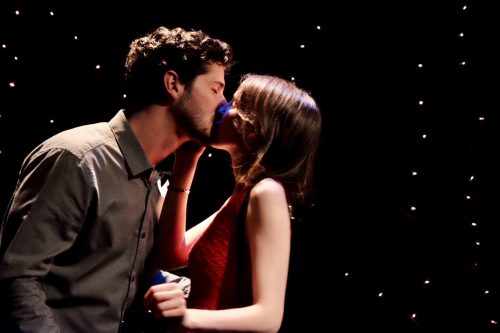 We’re in the millennial zone –apparently. But the subject matter seems universal. Two young, lonely people actually find each other. What? In this disconnected “online” existence of virtual everything? Yes, they bump into each other with all their faults and flaws and failures. Porter is a “wunderkind” who fell off himself, burning out in a corporate meeting and finding catatonia and the solidity of the floor. (At least there is something underneath him.) He hasn’t worked for four years and needs to find a job, but can’t open the door back into the hell of it all.

He finds Heather, a blind, driven, hardworking, independent control freak who needs to find the edges of things to feel safe in the world. They find each other’s fault lines fascinating. Their worlds are peppered with a lush, lonely mother, a conman dad, a Latvian house-cleaner, an ex-wife, a mutual frenetic friend, a biased boss, an over-protective house mate, a burly barista, a wary administrator, and a loyal assistant. All of these characters sandpaper each other, leaving little moments of raw sensitivity.

Paul Weitz’s script is episodic and to the point. There is no extraneous over-writing. He condenses each moment into its most concentrated form – undiluted. It’s compulsive viewing. It’s like having a remote control in your hand and flipping channels between the different characters’ story lines. (I’m showing my age with a TV reference; remember TVs?)

Director Christopher Campbell-Orrock has done a truly brilliant job maximizing the challenges of the small space with innovative devices. He keeps the dance of the blocking smooth, with scenes flowing seamlessly into the next environment. The pace was electric, and yet each scene had its own perfect rhythm. I always think that true directorial magic lies in the transitions between scenes, and Campbell-Orrock perfects these segues. Hooray!

Adam Maggio as Porter, the man clawing his way back into the world, was magnetic. He was completely compelling and gave a heartwarming, invigorating performance that showed a variety of emotions. Rachel Goodgal was seriously impressive as the visually impaired Heather. She was utterly convincing as she confidently moved about the space as a non-seeing person, and yet we saw every visualization so clearly in her eyes. She delivers a powerful, mesmerizing performance.

Margaret Curry in her three roles showed her enormous versatility and experience. She crafted three unique characters with humor, truth, and talent. Leon Morgan’s three were clearly defined, believable beauties. I particularly loved his “Little Dog” corporate canine. He was on fire and rattled all surfaces with his huge energy.

Hannah Yi gave us obsessive, loyal, and loose cannon characters with the skill of a chameleon. She slipped in and out of the parts easily. Andrew Hamling gave us a great antagonist – the fraudster, conman dad. It was a pleasure to loath him. He keeps disturbing Porter’s equilibrium and is a fantastic “baddie.” He also plays the antagonist to Heather, the patriarchal, close-minded boss, with cringeworthy brilliance.

I have to sing the praises of set and props designer Wesley Cornwell for his inspired use of the small space. He transformed the Jewel Box magnificently with his simple and totally mind-blowing set elements. Joshua Langman’s lighting design complemented the set and the action superbly. TJ Burleson gave us a wardrobe full of gorgeous costumes. The actors must have been performing impossible quick change feats in the tiny backstage areas, but it’s worth it from out front. Patrick Lachance’s sound design kept the show’s momentum at a galloping pace and supported and enhanced the on stage action.

West of 10th has produced an intimate, heartwarming, question posing, stirring production that galvanizes the spirit to want to go out and connect in the flesh.

Running Time: 90 minutes, with no intermission.