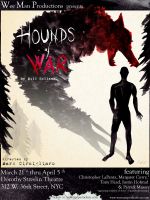 An emotionally spinning depiction of the family struggles encountered by a military veteran is poignantly and fiercely brought to the Dorothy Strelsin stage, in Hounds of War. The intensity of this production is woven with clearly expressed sentiment and dialogue, fueled by a synergy among the actors that is highly effective. Written by Bill Holland, a Korean War veteran, presented by Wee Man Productions and produced by Mark Cirnigliaro, Hounds of War takes you into the depths of a man’s tattered soul, his demons and the havoc wreaked on the lives of so many. The theater’s intimate setting, where the audience is nearly one with the performers, brings us even closer to the troubling view of the wars fought internally and externally, and the overall effect is truly spellbinding.

The stage is set with Jim (Christopher LaPanta) and his wife Mary (Margaret Curry) moving to the middle of nowhere for a new beginning to a topsy-turvy world ignited by a raging alcoholic, now newly recovered. The dynamic between the two characters plucks you from your own dimension into theirs with the same control found in an engrossing novel. The cast of five captivates with acting at its finest. The production runs 93 minutes with no intermission as any break to the action would be sorely felt. One scene glides to the next as the audience waits with wide-eyed wonder as to what hammer is to fall next. The beauty of this production is the deep characterization of the emotional composites in the lives it presents and the social and solitary struggles endured.

Henry (Tony Head) is the kindly gentleman living next door and a hunting partner and new found friend of Jim. Henry’s mild and moderate temperament is played to perfection. The couple’s very different sons, Larry (Justin Hofstad) and Robert (Patrick Massey), arrive at the cottage to spend needed time as part of the ravaged family unit. The older boy, Larry, takes after his father and is awaiting orders to ship out to war. Robert, a college student who partakes in political demonstrations, is at the receiving end of a father who, plain and simple, can’t stand him. Yet, the boys relationship is beautiful to watch as they relish in sibling lovingness and playful rough-housing terror with one another. Both actors offer a talent and shine not to be missed. The interaction amongst the cast allows for a slow release of damning secrets and sheds a light onto the passions, stains and un-mended sorrows, that are ultimately felt and sympathized with, rather than merely witnessed.

While final scenes of the play run a bit too long and get convoluted in an excess of antics, the overall breadth and timing of the play is triumphant.